From the original threadless headset to the game-changing Double Barrel shock, since 1974 cane creek has designed, tested and hand assembled some of the industry’s finest cycling components in our original facility in Asheville, North Carolina. At Cane Creek, they make products that the industry believe in, components that live up to the highest standards of quality and performance – developed and assembled by riders who rely on them every day.

In 1974 international bicycle components manufacturer Dia-Compe Japan established their U.S. headquarters in the Cane Creek Valley, just outside of Asheville North Carolina. The official reason for the location was to take advantage of a skilled local manufacturing workforce but rumour has it that company executives were equally fond of Western North Carolina’s beautiful mountains and golf courses. 
Despite a primary expertise in brakes, the company began to expand their product line in the late 1980s, taking on manufacturing, distribution and sales of the RockShox® RS1 suspension fork in 1989 – the first widely available suspension fork in the world.
The following year, after a chance encounter with inventor John Rader at the World Championships in Durango, Dia-Compe acquired the patent to a groundbreaking method for creating headsets with no need for complicated threads. Engineers inside the company began to work with Rader to perfect this new “threadless headset.”

In 1992, employees of Dia-Compe USA purchased the company and Western North Carolina facility from the parent company in Japan. Dia-Compe USA was reborn as Cane Creek Cycling Components – an employee-owned company dedicated to the idea that the best way to predict the next trend in cycling is to create it. Shortly thereafter, Cane Creek introduced the AheadSet® – the original threadless headset based on John Rader’s design – paving the way for a revolution in frame and fork design.

Over the years this enthusiasm for great cycling products has manifested itself in a variety of groundbreaking products – from the development of the Speed Check disc brake system; to the original Thudbuster suspension seatpost; to the best-in-class 110 headset; to the game-changing rear suspension technology of the Double Barrel; and on to the hard-charging HELM Suspension fork – we continue to develop premium components for many types of bikes and many types of riders.

 In 2016 Cane Creek drew upon our roots as a brake manufacturer and entered into a partnership with industry renowned inventor and product designer Craig Edwards to manufacture and distribute his ultralight eeBrake system. Craig remains an active part of new product development at Cane Creek as a special products engineer helping to develop and design the game-changing products of tomorrow. And so, for nearly forty-four years, we’ve designed, tested and hand-assembled premium bike components right here in Western North Carolina. For us, attention to detail and pride in our work is personal. At Cane Creek, we make products we believe in – products that we want to ride and are proud to claim as our own.

CLIMBING SWITCH TECHNOLOGY
CS is the most innovative climbing feature available and is now standard on all  Cane Creek CS & IL Double Barrel shocks. This proprietary climbing feature (patent-pending) for Double Barrel shocks alters the entire low-frequency dynamic response of the shock to specifically address the demands of ascending on a bicycle.

WHAT IS IT?
CS is a selectable climbing mode on Double Barrel shocks that allows the rider to retain the advantages of a fully-suspended bike while climbing, without unwanted suspension motion.  CS is not your conventional pedal-platform as it adjusts both LSC and LSR.  By selectively tuning both compression and extension phases when climbing, the shock maintains better traction and control while enhancing pedaling efficiency through the shock’s entire travel.

WHY IS IT BETTER?
The strength of CS lies in the fact that it provides climbing-specific chassis damping in both compression and rebound.  The result is better rear-end traction and connection with the trail while minimizing annoying pedal-induced bob.  Simply put – the rider is less fatigued and more comfortable.  Traditional climbing “platforms” only deal with one-half of the climbing dynamics, and thus require the rider’s body to respond to the minimally damped rebound forces that are common during technical climbing.

HOW DOES IT WORK?
The Climb Switch changes the low-speed damping of Double Barrel shocks in one simple switch, to optimize suspension dynamics during climbing.  It does this by turning on and off a set of internal ‘climbing circuits’ that are accessed when CS is engaged.  Cane Creek tunes the ‘climbing circuits’ specifically for the demands of off-road climbing to achieve improved pedalling efficiency with less chassis motion. When the rider is ready to descend, with the flip of CS, the shock returns to the traditional low-speed circuits of the Double Barrel.

HOW IS IT DIFFERENT?
The CS feature on DB shocks completely alters the low-speed damping character of the shock.  That is, CS changes compression and rebound damping simultaneously to mitigate unwanted chassis motion while climbing without compromising the traction and control one expects from a modern suspension bike. Other shocks with climbing specific adjustments only alter the compression behaviour of the shock with no impact on rebound.  The Dyno Chart below illustrates the action of the DBair with CS ON and CS OFF as compared to the competition.  A damper generates force in opposition to velocity.  As velocity increases, so too does the force generated by the damper. 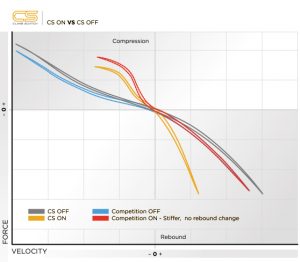 showing the climb switch on a cane creek MTB shock

 
GRAPH OVERVIEW
The horizontal axis of this graph shows shaft speed (velocity).  Negative velocity indicates the shaft is moving into the shock (compression) while positive velocity is extending the shock (rebound).  The vertical axis represents force.   Positive force is the force generated to resist compression and conversely, negative force is the force generated to resist shaft extension (rebound force).  In a nutshell, the upper left quadrant is compression, the bottom right is rebound.  As velocity increases (moves away from the middle) the force increases.

CS ON VS. CS OFF
The grey line is a graph of a shock with CS Off and is indicative of a typical Double Barrel damper at a mid-range setting.  The orange line is the CS ON setting and is much steeper than the grey line.  This indicates that for the same shaft speed, the CS ON setting develops more force.  In other words, the CS ON setting is stiffer and resists movement more than the CS OFF setting and both compression and rebound are affected.  For the rider, this translates into better traction and control at low speeds.

TRADITIONAL CLIMBING PLATFORMS
The red line is a competitor’s shock with the climb feature on and the blue line is the competitor’s climb feature off.  Most notably, the rebound curve overlaps because there is no change in rebound damping.  The compression curve is steeper because our competitors require more compression damping to make a bike feel efficient by limiting the suspension movement. The rider’s body is then required to respond to the minimally damped rebound forces and can experience less traction, less control and more fatigue.
CS stabilizes the suspension during both phases of the shock’s travel – so your full suspension bike can be a full suspension bike all the time.

This information is reproduced from Canecreek.com

Book Your Type Of Service Here

Book a service and check our availability.

We use cookies to ensure that we give you the best experience on our website. If you continue to use this site we will assume that you are happy with it.Ok